Custom Weed Control, Inc. incorporated on August 8, 1984 by three fraternity brothers from Roanoke College, Lyle H. Anderson, David R. Schoonover, and Larry E. Sharpe. The idea was to provide industrial companies throughout Virginia a service to control weeds and brush around their facilities.

No operations were conducted until April 1, 1985. The company operated one truck and hired one part time helper. Lyle Anderson was the only full time employee. David Schoonover continued to work as a stockbroker for Hilliard Lyons. Larry Sharpe continued to work as a chemical salesman for Forshaw Chemical. Company business was conducted out of basement of David Schoonover’s house. Terry Schoonover, David’s wife worked part time to handle the bookkeeping. Also in 1985, Custom Weed Control worked for its first Electrical Utility, Craig Botetourt Electric out of New Castle, VA. Craig Botetourt had been purchasing herbicide and doing its own applications with mixed results.

In the summer of 1986 Custom Weed Control had two full time employees, and one truck. In late 1986 Larry E. Sharpe came on board after departing Forshaw Chemical. At that time Custom Weed Control’s name was changed to Weed Control, Inc., CWC Chemical, Inc., was formed and both companies operated under a new holding company called CWC Enterprises, Inc. Terry Schoonover came on full time to handle the office. Larry was responsible for obtaining chemical distributorships and chemical sales. Also in late 1986 the company moved its operations out of Schoonover's basement into a small office and warehouse in the Roanoke Industrial Center. The office had approximately 600 square feet of office space and the warehouse had approximately 2,000 square feet of space.

In the spring of 1987 David R. Schoonover left Hilliard Lyons and came on board. He worked in the Weed Control side of the company and with the overall marketing effort. Weed Control now had two trucks and company wide there was seven full time employees.

In 1989 a new strategy and focus for Weed Control and CWC Chemical began to emerge. The Utility market as a whole and especially the Electrical Co-op market seemed to have been neglected by other chemical applicators. As a result these Co-ops seemed eager to try new ideas, grow their programs slowly, and were very loyal. While the industrial market was not abandoned the bulk of marketing effort was changed to the utility market. This new focus of Weed Control and CWC Chemical began to change toward the electric utility market.

In 1990, we recognized that a positive environmental approach to herbicide use was beneficial for our company and for the industry as a whole. David Schoonover began working on the idea of container management utilizing returnable refillable containers. In November of 1991 Aqumix, Inc. was incorporated. This new company’s purpose was to develop an environmentally sound and cost-effective system of providing container management utilizing returnable-refillable containers. This also include the promotion of closed system handling of concentrates and pre-mixed solutions to increase worker safety. In the spring of 1992 CWC Enterprises, Inc. and Aqumix, Inc. moved into its new 10,000 Square foot facility in Cloverdale, Virginia. Sales continued to grow even in a period when the economy and market were depressed.

In 1994 CWC Enterprises, Inc. won the Small Business of the Year Award given by the Roanoke Valley Chamber of Commerce. This award was in recognition of outstanding growth and contribution to the Roanoke Valley. Weed Control, Inc. operated a fleet of nine trucks and crews throughout Virginia, North Carolina, and Maryland servicing more than twenty Electric Cooperatives. Throughout the 90's Weed Control continued to operated and grow it's application business slowly. Early in it's history Weed Control decided to adopted the theory that we would only grow the business as fast as we had the qualified persons to achieve the highest degree of customer satisfaction.

In 1996 Weed Control operated 11 crews and maintained its clients so well that 95% of Weed Control business was still non-bid.

In 1998 CWC Enterprises & Aqumix added to its existing facility 15,000 more square feet of warehouse space which Aqumix moved into. Weed Control operated 16 crews throughout the Mid-Atlantic.

On January 1st 2002 CWC Enterprises was split up. Dave Schoonover became sole owner of Aqumix. Larry Sharpe became sole owner of CWC Chemical and Lyle Anderson became the sole owner of Weed Control. This split up allows each owner to concentrate his efforts on providing better service within each respective market segment. The restructuring of the three companies has been well received by the industry, and most importantly our customers.

The new "Weed Control, Inc." continued as before with the same philosophy. Provide our customers with the best possible service and slow responsible growth. In 2002 we added a new industrial salesman (Crenshaw Reed) who increased industrial sales by 34%.

In 2004 Weed Control, Inc. completed it's twentieth year of herbicide application. Also, we are now providing a Tree Growth Regulator Service as well as the standard services. Weed Control, Inc. is now operating 23 service vehicles throughout the Mid-Atlantic.

Steadily growing into 2013, Weed Control, Inc. now operates 29 vehicles and continues to provide uncompromising excellence to it's clients of which most have been our customers' for more the twenty years. A new generation of applicators have been advancing through our company and our prospects for the future are bright because of it.

In 2014 Weed Control moved out of it's long time Cloverdale home and into a new home in the City of Roanoke, VA, at 2314 Patterson Ave. SW, 24016. The office has 4,500 square feet of office space and a small garage for maintenance and chemical storage. Plans are now in the works to build a new metal 3,600 square foot storage building this fall. 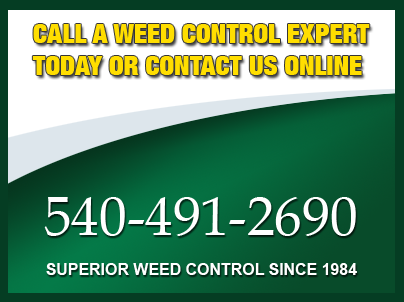